YUKA MITO/Love in the City: The sassy, swinging thrush reconvenes her original Allan Farnham Covid interrupted trio with a few ringers and a bigger dose of swing.  Covering the water front in a way that’s clearly more club than cabaret, the knowledge, depth and appreciation for the form make this really pop.  A winner that holds it’s own against all comers.

“Ms Yuka Mito’s performance at Jazz at Kitano on 10/17/13 was superb, she captured the audience with her soulful sound on ballads and her swinging uptempo tunes.  Yuka’s program consisted of a nice mixture of medium to uptempo tunes,  ballads, sambas and some jazz standards done with a Latin feel all performed wonderfully”. Bravo Yuka !…..

Review on All About Jazz by Edward Blanco – February 2012 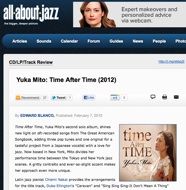 Time After Time, Yuka Mito’s second solo album, shines new light on oft-recorded songs from The Great American Songbook, adding three pop tunes and one original for a tasteful project from a Japanese vocalist with a love for jazz. Now based in New York, Mito divides her performance time between the Tokyo and New York jazz scenes. A gritty contralto and ever-so-slight accent makes her approach even more unique.